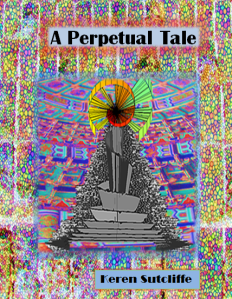 Book 3. The Wave and the Particle

Should she press on, could she fix up this work, did it have any credibility?
Was it a stumbling block, a humiliation or a triumph
…or was she embarrassing herself …?
Except from My Painted Elephant.

Brenda read over what she had written and thought it all sounded pretty good and thought to herself, “I hope I win The New Media Writing Prize.”

When she looked up Claude was walking toward her. She smiled at him.

“Bonjour. How are you?” she asked him.

“Bonjour. I am very well, thank you, howz it goin’?” he replied with a wink. He found her Australian accent amusing.

Brenda was happy to see Claude. They had been friends for a few days now and even though she was finding it tough living on the streets of Paris she enjoyed having someone to talk to. The first days had been hard but very rewarding. She had finished a first copy of her book My Painted Elephant and was now writing a sequel called The Wave and the Particle.

“I’ve reread the whole of My Painted Elephant and The Wave and the Particle and  I still don’t think it flows very well and it is probably still confusing,” she told Claude.

She had begun linking pages on her website, cutting bits from here and there, rewriting some characters and giving them their own web pages. She had also fixed up a lot of punctuation errors in both titles and she cringed when she thought about how some people had read it with all the mistakes in it. How could she go back and fix up the original version of My Painted Elephant (Shakespeare & Company Version); now it was ‘out there on the net’?

Brenda wanted to make the new title A Perpetual Tale the beginning but was worrying about readers who were already reading the work and who would now come back to the website to finish reading My Painted Elephant or The Wave and the Particle and have trouble finding them.

After she fixed all that up she really felt she needed to get back to the story. She now had multiple story lines happening which made writing seem an effortless task.

Pushing herself on, she thought, perhaps I could get some assistance from the universities with the hologram problem.  She really wanted to see Kesbooks Skytower become a reality. The wind whipped up around her neck and she looked out across the skyline – all of Paris lay before her but she put her head down and kept typing and singing to herself.

In my dream I know,
Who I want to be.
When will it come true?
Will you be there too?

Except from Homeless in Parisdise

Claude started singing too. He was used to Brenda going into her own world.

“Anyway the good news is that The Red Forge Publishing House gets cyber-attacked and this turns out to be of great benefit to the team because all the victims of the attack look at the The Red Forge Publishing House website and begin reading the story, and also the investigators, who are trying to find the criminals, also now know the website.” Brenda tells Claude. “It is the way it becomes successful.”

He has to admit he is impressed with this. Brenda had been complaining about a fake email she had responded too and nearly gave away all her personal details. She had been furious. Now she has put a positive spin on it and put it in her story.